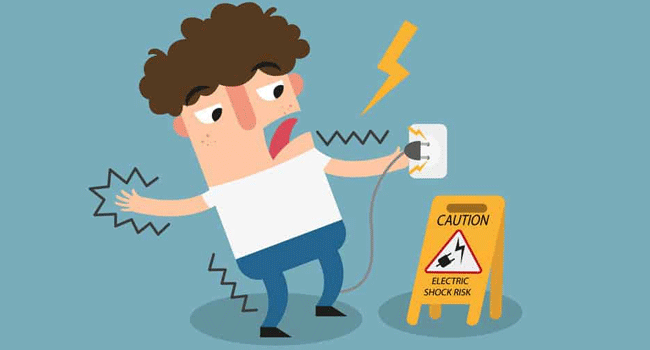 C. J. Krishna was travelling to work on a moped to attend duty at Tirupathi. He reached Manglampet Road at 5.30 am on April 22, 2011 when he came into contact with a live 11 kilovolt (KV) electrical wire and died due to electrocution.

His widow, Vijaya Kumari, and three minor children filed a complaint before the State Consumer Commission of Andhra Pradesh alleging deficiency on the part of the Andhra Pradesh Southern Power Distribution Company Ltd. (APSPDCL). The case was defended by APSPDCL, which claimed that heavy rains and thunderstorm had caused the wire to get detached and fall on the ground. It argued Krishna had come into contact with the wire because he had failed to exercise proper care and caution.
The State Commission held that the electric company had been negligent in performing its public duty. It also held Krishna responsible for contributory negligence. So, it adjusted Rs. 5,14,80 towards contributory negligence and ordered APSPDCL to pa Rs. 10,30,000. Additionally, Rs. 5,000 was awarded for costs.

Both the parties appealed against the order. While Krishna’s family wanted the compensation to be enhanced, the electric company wanted to be exonerated from liability for negligence. APSPDCL argued that Krishna could not be considered a consumer and that the complaint was not maintainable. The National Commission pointed out that APSPDCL was the electricity supplier in Tirupathi. So, even though street lighting was not paid for, Krishna could still be considered a consumer of the street lighting services provided by the electric company.

The National Commission observed that no expert evidence had been produced by APSPDCL to substantiate how a 11 KV wire could get detached due to rain and thunderstorm. the Commission conclude that the wire had got separated due to lack of proper maintenance, supervision, and adoption of safety measures. It also observed that a higher duty of care is required for maintenance and monitoring of high voltage lines to keep them in good condition and prevent mishaps due to thunderstorms, a standard feature. This duty becomes more onerous when a high voltage line passes over a main road since it would endanger traffic, as held by the Supreme Court in M.P. electricity Board vs. Shail Kumar.

The National Commission disagreed that Krishna could be held responsible for contributory negligence, considering the poor visibility at 5.30 am and the adverse weather conditions on the day when the incident occurred.

Accordingly, by its order of January 27, 2020, delivered by Justice V. K. Jain, the National Commission dismissed the electric company’s appeal. The appeal filed by Krishna’s family was allowed, and compensation was enhanced to Rs. 15,43,740 to be paid along with 8 per cent interest from the date of the complaint.