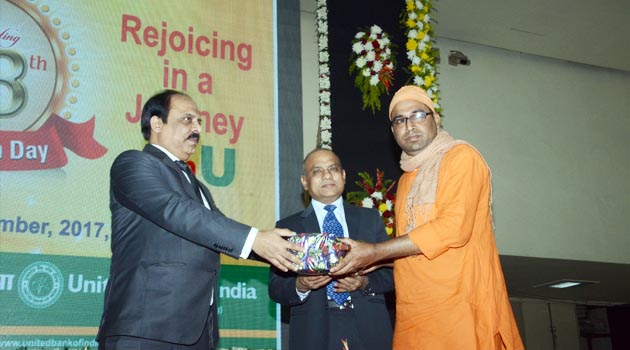 United Bank of India, the Kolkata head-quartered Bank and the SLBC convener for the State of West Bengal today celebrated it’s 681h Foundation Day with great fervor and festivity. Like the past years, this years’ function was also marked by the Bank’s CSR initiatives in which the Bank distributed blankets to the impoverished and slum-dwellers through Ramkrishna Mission, Bag Bazar. On the occasion of the Foundation Day, the Bank launched a host of products and services. It announced the soft launch of its Credit Cards and launched Bharat QR Code, and a couple of web portals for the benefit of its past and present employees Sri. Pawan Bajaj, Managing Director & CEO of UBI said “I am happy to announce the soft launch of ‘United Credit Cards’. The cards will be launched under the brand name “Pragati” and “Suvidha”. Although we are a late entrant, I am confident that it is going to play a worthy supporting role in bringing in new corporate and HNI within the Bank’s fold. In his address to the employees of the Bank, Sri Bajaj emphasized on reduction of IPA, cost control and enhancing profitability of the Bank. He reiterated that going forward the Bank will continue to focus on the retail and MSME sectors for credit dispensation rather than larger corporate exposures. On the occasion of the Foundation Day the Bank felicitated the Regional Heads, Branch Heads and Individuals’ which have been the top performers under United. Retail League Monsoon Dhamaka and United Ru-pay Moments Card Campaign.

Executive Director, Sri. Ashok Kumar Pradhan in his welcome address reminisces, the glorious past of the Bank. While mentioning that, off late the faith of people on Public. Sector Bank is dwindling, he advised all employees to take solemn pledge to re dedicate themselves to redouble their efforts with an unflinching commitment to revive the spirit of the Bank and to regain the faith of the people.

A cultural program was organized by the in-house talents who have excelled at state and national level Sri. Debashish Mukherjee, General Manager proposed vote of thanks.