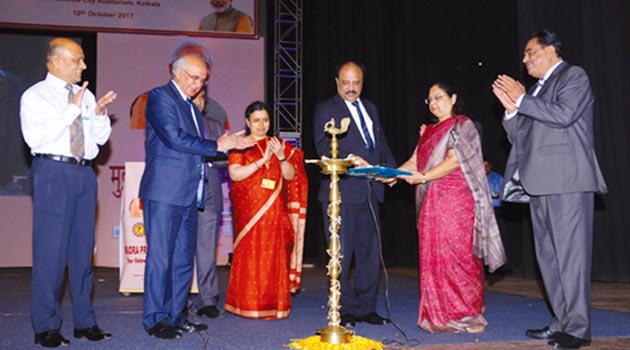 Today amidst much fanfare and a vast gathering of bankers, small scale entrepreneurs and press & media, the nation-wide Special Financial Inclusion Camp (FI Camp) and MUDRA Promotional Campaign were launched at the Science City Auditorium by Sri. Pawan Bajaj, Chairman of the State Level Banker’s Committee (SLBC) for the State of West Bengal and Managing Director & CEO of United Bank of India, the SLBC Convener Bank. The programme was organized by the SLBC of West Bengal spearheaded by the Convener United Bank of India. Smt. Anindita Sinha Ray, from the Ministry of Finance, Sri. Ashok Kumar Pradhan, Sri. Charan Singh and Sri. S. Harishankar, Executive Directors of United Bank of India, UCO Bank and Allahabad Bank respectively were present at the dazzling inaugural function.

At the initiative of the Central Government, for promotion of the MUDRA Scheme and creating awareness among people and to give fillip to the “Digital India” project to move towards paperless transaction environment, the banks are organizing FI-camps at least at 50 (fifty) locations across the country during the fortnight beginning 2nd October 2017. The inaugural camp was organized on 2nd October, 2017 at Varanasi.

Micro Units Development and Refinance Agency Ltd. (MUDRA) has been launched on 8th April, 2015 by Hon’ble Prime Minister of India under Pradhan Mantri Mudra Yojna with the objective of extending refinance to the banks for lending to small and micro non-farm enterprises in manufacturing, trading and services having credit requirements up to Rs.10lacs without any collateral. The overdraft amount of Rs.5000 and agri-allied activities like Animal Husbandry, Bee Keeping, Poultry, Dairy, and other service associated to agricultural activities do also qualify for Mudra Loan. The scheme carries inherent credit guarantee extended by National Credit Guarantee Trustee Company Limited (NCGTC).

Addressing the gathering, Sri, Pawan Bajaj, Chairman of the SLBC-West Bengal told – “I am sure that with these sorts of initiatives at the Central Government level from time to time, the culture of entreprenurship will flourish and India will further consolidate its position as the business hub in the region. The success of the scheme will also empower both financially as well as intellectually the rural youth and women.”

However, while explaining the challenges faced by the banks and financial institutions in sanctioning loans under the scheme, he pointed out that lack of credit history of these small borrowers and limited bureau services are proving to be major handicaps. The other speakers also emphasized on the importance of capital flow for the business and timely repayment to the banks so that both the loan givers as well takers flourish equally.

The scheme is supposed to have met considerable success in the state as is evident from the announcement made by Sri Bajaj – “I am happy to inform that in the last fiscal (2016-17) all financial institutions together disbursed Rs.15149.06cr. in the state of West Bengal, against an annual target of Rs.7588.34cr. achieving 199.63%.”

The borrowers who have already availed MUDRA loans from various banks shared their experience as to how they have been able to start their ventures from the scratch and expand their business with the aid of the loans from the banks.

Sanction letters were also distributed to the fresh loan seekers through the hands of the dignitaries present on the dais.

In order to promote digital transactions, a demonstration was given on BHIM-UPI (Bharat Interface for Money – Unified Payment Interface) and a live transaction was executed to establish the efficiency, convenience and speed of cashless transactions on the virtual platform.

The programme concluded with the national anthem. At the conclusion of the formal function, the dignitaries visited the stalls put up by all banks both from public and private sectors and public sector insurance companies, and interacted with the bankers and the borrowers. The stall of United Bank of India was inaugurated by Sri. Pawan Bajaj, the Bank’s Managing Director & CEO.