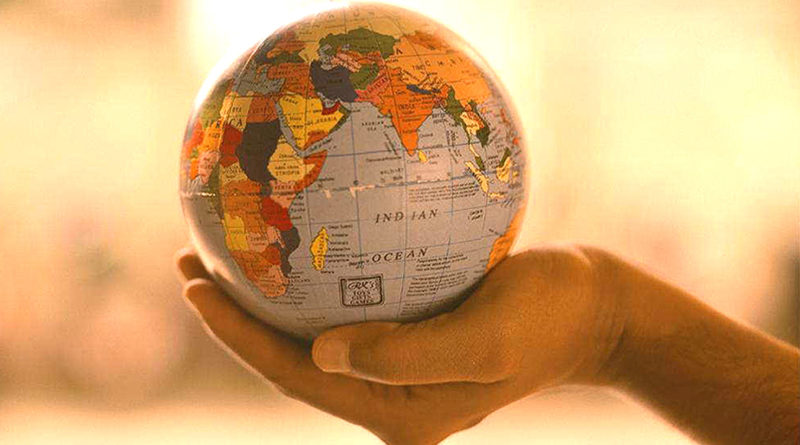 The domestic economy has been passing through a challenging phase for a long time. Nearly eight years have passed since the 2008 Global financial meltdown, still growth in the country has not yet been stabilized. The domestic Gross Domestic Product (GDP) has started inching up. GDP has been sequentially increasing for last two financial years. It was 5.1% in FY’13 and jumped to 6.9% in FY’14 and then increased to 7.3% in FY’15 as per the new methodology of computation.In FY’16, it increased from 7% in Q1 to 7.4% Q2. However, the GDP growth figures for H1 FY’16 came down to 7.2% from7.5% during H1 FY’15. This indicates that the GDP growth scenario is not yet stabilized. Apart from that,the monthly economic growth statistics being released by various agencies from time to time over past couple of months are not coherent indicating that growth has not yet been broad based. Some statistics show upward movement in one month and in the next month they go south which create confusions in the mind of analysts on where the economic growth is leading to.

In this context, this paper is an attempt to outline the emerging conflicting economic growth statistics that create contradictory views among the people about the economic growth of the country and finally deriving a concrete conclusion out of that.

The industrial growth measured by Index of Industrial Production (IIP)has recorded growth of   7.3% in the H1 FY’16 which is considered to be a good growth ratewhereas credit growth of the banking system has been languishing below 10% for a long time. Ideally, when there is industrial growth,demand for credit also should correspond to that but this is not happening.The credit growth of the banking system was languishing below 10% for a pretty long time except for the quarter end/year end spurts. It was believed that dip in credit growth of the banking system was substituted by the credit off take from the alternate sources like capital market because of availability of cheaper funds there. However, a newspaper report recently has shown that Indian firms raised the lowest amount via both onshore and offshore debt markets in past six years in 2015, as domestic capital expenditure plans remained on hold and the turmoil in global markets dragged down foreign currency borrowings. Data from Dealogic, a financial data provider, show that an aggregate of $37.5 billion was raised through the debt capital markets in 2015—a drop of 28% over last year and the lowest since 2009 when firms raised $29.1 billion.

Further, to add to the conflicting thoughts, export of the country has been contracting for last eleven months till November 2015. Domestic demand is dampened by the weak rural demand because of two back to back monsoon disturbances. Continuous low consumer goods production growth which is a sub-index of IIP is also a witness to the fact that domesticconsumption demand is not promising for past many of months. The MNREGA scheme is falling to provide 100 days of employment to the rural people. So, in the scenario when global demand is weak, domestic demand is also muted, then one would wonder how industrial growth of around 6% is happening!

Another interesting fact which create confusion in the mind of the analysts is the employment statistics released recently.  Despite the GDP statistics of MOSPI shows that manufacturing sector has been showing good growth rate of around 6.5% in first two quarters of FY’16,Job creation in the manufacturing and export-oriented sectors fell to a four-quarter low in three months ended 30 June 2015.In April-June 2015, the number of jobs in the textiles, automobiles, leather, metals, gems and jewellery, transport, information technology (IT)/business process outsourcing (BPO) and handloom/powerloom sectors fell by a net 43,000 from the previous quarter, as per the 26th quarterly Employment survey conducted by the Labour Ministry. In the March 2015quarter, these sectors added 64,000 jobs, on top of the 117,000 jobs created in the preceding three months.

The monthly IIP growth figures show actual industrial production growth over same period last year. The Purchasing Managers Index (PMI) is the advance estimate of the export order, supply order, labour& raw material demand etc of 250 top manufacturing and service companies. The chart below (fig-1) shows that PMI figures for both the manufacturing and services has been coming down over months but the IIP figures are moving up and down. Ideally high PMI is an indicator of high IIP and conversely. But the statistics emerging for past couple of months does not show a clear correlation between the PMI and IIP.

The economy has been on a disinflationary path for quite some time. The inflation figures are measured by Wholesale Price Index (WPI) and Consumer Price Index (CPI).The movement of both the indices given below shows that WPI has been continuously in negative territory for 11 straight months till November 2015 and CPI is rising (chart-1). In India usually, the price level remains high during March to September of every year. This year there was crop loss in some parts of the country because of unseasonal rain resulting into low supply of cereals & vegetables.Despite that CPI inflation remained moderate continuously during the period. However, it can be observed that the Prices of Indian crude basket continues its southward journey and is at 12 years low level in January 2016. Now, there is supply of Rabi crops and also harvesting of Kharif crops but CPI inflation is inching up since September 2015 so far till December 2015. Though there are some difference between CPI and WPI in terms of composition and coverage of goods, yet there should not be divergence between the two inflation rates for such a long period. This depicts a paradoxical situation so far as price level in India is concerned. Interestingly, though WPI in treading in negative trajectory compared to movement of CPI in positive zone, the direction of movement of both measures of inflation is in tandem with each other which is depicted in the fig-2. 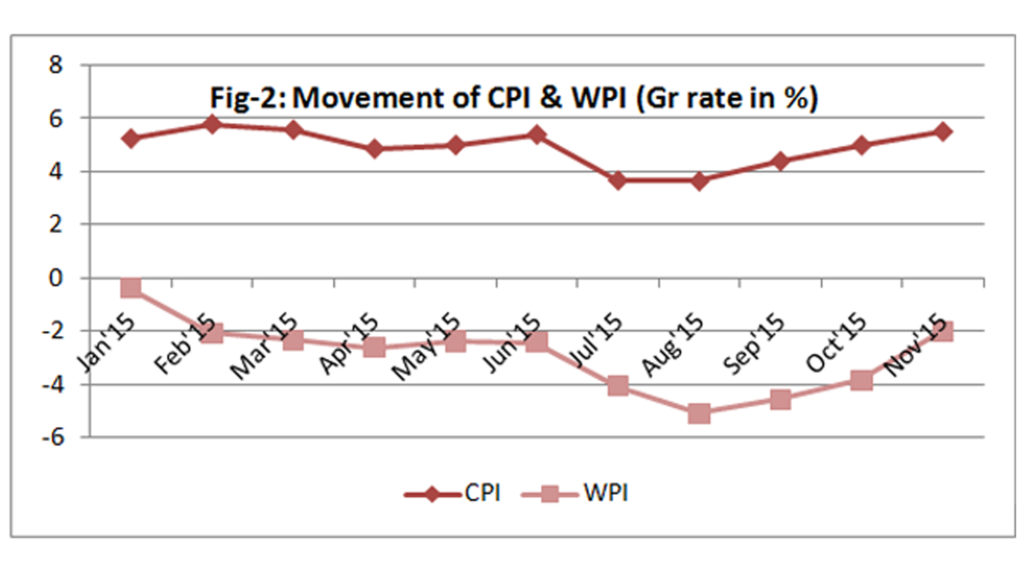 The twin deficits i.e. Fiscal deficit and Current Account Deficit (CAD) are under control in FY’15 and so far in FY’16. The Govt. has also set medium term a target to bring down fiscal deficit to 3% over a period of three years by 2017-18 from 4% as on FY’15 which is well intended and appreciated also. The Govt. is curbing/rationalizing its expenditure to control fiscal deficit. This is also logical in view of muted Govt. revenue both from tax and non-tax sources. The mid-year economic review report by the Govt. for the financial year 2015-16 shows that the private investment is not picking up. It is the public investment that is driving the economic growth so far. The Govt is taking a number of measures to promote PPP model of investment drive but it is not coming up in the expected lines till now. Hence, to encourage private investment, there is a need for “Pump-Priming” by the Govt.  However, if this is done, then fiscal deficit target will have to be sacrificed. For greater interest of the economy, the Govt. should not curtail capital expenditure till “ease of doing business” sentiment improves. The Govt. should look for other sources like reducing subsidies on food, fuel and fertilizer and also take measures to increase revenue through meeting the disinvestment targets.

Coming back to the CAD, it has eased 1.3% of GDP for FY’15 compared to 1.7% for FY’14 and 4.8% in FY’13. Similarly, for the H1 FY’16 the CAD has been at a comfortable level of 1.4%of GDP compared to 1.8% during the same period last year. The policy makers are relieved that the CAD has been under control after a long time. It may be observed that the major reason for such easing of CAD is low trade deficit (Imports- exports). For nearly past one year both exports and imports have been contracting resulting into low trade deficit which on the other hand has kept CAD moderate. The question is whether a moderate CAD is desirable for the economy which is resulted by contraction of both exports and imports. Contraction of exports hurts GDP figures. On the other hand, contraction of imports is obvious because of low crude and gold prices. Further, import of non-oil and non-gold items are also plummeting which is worrisome.

The global economy is passing through a challenging period for pretty long time since 2008. Such a protracted slowdown in global economy has not been witnessed earlier. When the US & EU economy is gradually coming out of economic slowdown, China the erstwhile fastest growing economy has entered into the phase of slowdown. China being one of the major exporters in the world and one of the largest consumers of crude oil has caused a lot of volatility in the world economy currently. Among the Emerging Market economies, India has emerged as a sweet spot for the investors as per the IMF report. Proactive monetary policy and prudent fiscal measures have kept the growth forces of the country going,although momentum in the growth rate is not coming up. Some structural reform measures like passing of Land Acquisition Bill, Single Window Clearance, GST& Bankruptcy Code etc. needs to implemented. These measures will help in improving the “ease of doing business” in India and attract FDI as well as domestic private investment. India is capital scarce country. Sustainable growth is impossible to achieve without participation of private investment. Economic growth on the ground can’t be driven based on sentiment & expectations for a long time. This is the reason for volatility in the economic growth statistics in India seen for past one year. It is an opportune time for Indian economy to pick up and become the global leader.