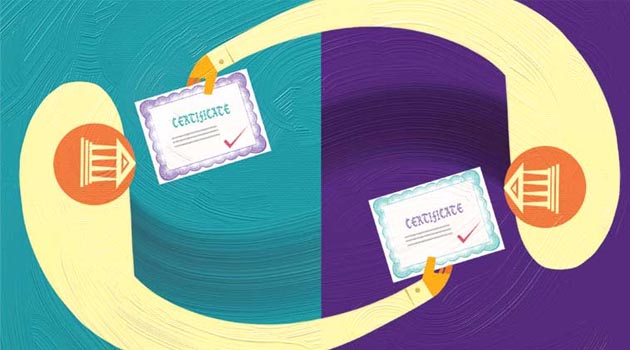 For domestic and foreign banks with 20 branches and above the targets under priority sector are at par now. Foreign banks with less than 20 branches are required to achieve the total priority sector target of 40 percent of ANBC or CEOBE, whichever is higher, in a phased manner by 2020. Further banks have also been directed to ensure that their share of lending to non corporate farmers does not fall below the system wide average for the last three years of direct lending to non-corporate farmers

The Raghuram Rajan Committee on Financial Sector Reforms had, inter alia, recommended introduction of “priority sector lending certificates (PSLCs)” to implement the priority sector lending in the country. The Committee believed that the process by which the priority sector mandates are implemented should be reformed to emphasize efficiency and ease of compliance, and once the new process is in place, the mandate should be strictly enforced. The focus should be on actually increasing access to services for the poor regardless of the channel or institution that does this—large banks may or may not be the best way to reach the poor, and while the mandate may initially force them to pay. Hence, the PSLC scheme was recommended by the Committee.

The criteria suggested by the Committee for certification (say by NABARD or its agents) would simply be whether the loan is to an eligible sector, whether the interest rate follows the norms below including transparency, and whether the loan duration is greater than 180 days. After an initial period of verification, institutions should be allowed to self-certify, with periodic random monitoring to ensure adherence to criteria. Separate certificates could be issued for enforceable sub categories (e.g., agricultural credit, weaker section lending, Micro enterprises, small and marginal farmers etc), and these may carry a different price.

A market (E-Kuber) was opened up for these certificates for buying and selling. In the PSLC market, the banks deficient in priority sector lending target can buy certificates to compensate for their shortfall in lending. Importantly, the loans would still be on the books of the original lender, and the deficient bank would only be buying a right to undershoot its priority sector-lending requirement/target by the amount of the certificate. If the loans default, for example, no loss would be borne by the certificate buyer.

At present the domestic and foreign banks are having different priority sector lending targets.

The Foreign banks may not have the branch infrastructure to provide agricultural credit. The Priority Sector Lending Certificate scheme will help them bear their share of obligations without a branch network. Given the magnitude of need to provide credit to undeserved segments/poor, all banks may be obligated to uniform priority sector lending.

The PSLC provides market-driven interest subsidy to those who make priority sector loans. In case NGO and other charitable institutions want to participate in financial inclusion, they may be allowed to enter and buy in this market. The Government can play role to facilitate this market by purchase of certificates or stabilizing the price of certificate or by specifying its target volume of purchase etc.

The PSLCs are different from the Inter-bank participation certificates (IBPCs). The IBPCs are a form securitization of loans through which a bank buys the assets of another bank for a stipulated period. In IBPCs, the buyer has to take on the credit risk of the loans, which is high in the case of the underserved priority sector. Further, the loans are to be securitized have to be standardized, well documented, and serviced. This may also be a problem in case of loans to the needy and poor.

It is an eligible tradable instrument for achieving priority sector targets. The buyer (a deficient bank) will pay a ‘price/fee’ to the seller bank (a bank which has over achieved its PSL requirements) for purchasing a specified amount of PSL obligation applicable for a particular date.

A will subtract the value of the PSLCs issued, (in this case Rs. 100 crore) from its PSL achievement and report accordingly to RBI on reporting date

B can claim Rs. 100 crore worth of fulfillment of PSL obligation in case he holds the PSLC on the reporting date

B finds he has no shortfall and therefore trades / sells on the platform to buyer C after 80 days at Rs. 12 crore. B credits P &L and C debits P & L for Rs. 12 crore

A finds he has over estimated his PSL achievement and he has a Rs. 50 crore shortfall in PSLC obligation by virtue of having to subtract this Rs. 100 crore – he purchases Rs. 50 crore worth of PSLC from issuer D for Rs. 7 crore and adds Rs. 50 crore to his PSLC achievement

Once upon a time Priority sectors Lending was considered as neglected sectors of economy. It is well known fact that these sectors contribute a lot for the growth of an economy. Due to one or the other reasons, most of the banks finds difficult in achieving the benchmarks stipulated by Reserve Bank of India under PSL. We all know that resources available to the banks are not uniform everywhere and expecting everyone to achieve the uniform benchmarks under priority sector lending resulting in shortfall in achieving PSL targets. Issue and purchase mechanisms of PSLCs are very good opportunity for the banks not only in achieving the targets under PSL but, very good fee based income to the seller banks which ultimately increases the profitability to the banks.

Banks are somewhat comfortable in achieving Priority sector lending targets after the issue of revised guidelines on priority sector lending guidelines with effect from 23.04.2015. No doubt that financing to PSL sector by the Indian banks brought a change in the economy, yet it is not free from some issues and inconveniences. It is the long awaited need of the hour that banks have been given an innovative creative approach by the regulators in achieving the PSL targets which will facilitates banks in sustaining nation’s priority.

My article on “Agricultural Lending in India – Trends, Issues and Strategies” published in ‘Sai Om Journal of Commerce and Management’