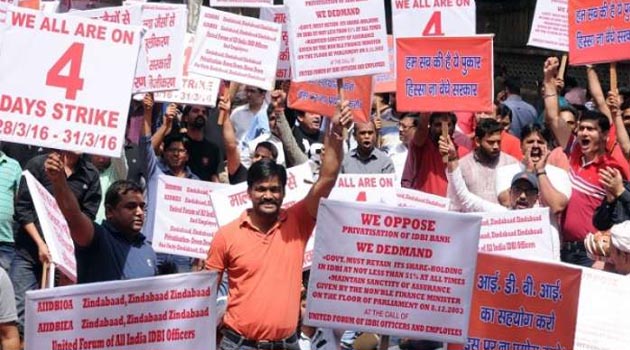 The two-day nationwide strike by IDBI Bank officers and other staff ended on Wednesday, with a union leader dubbing it a “resounding success” and a seniorbank official terming it a “total failure”.

The unions of both IDBI Bank officers and staff went on a strike on Tuesday and Wednesday in support of their demands.

“The employees’ response to the strike call was great. A majority of employees participated. Normally, in a day, around 250,000 transactions are done by all branches of IDBI Bank. This number was drastically affected due to the strike,” Vithal Koteswara Rao A.V., General Secretary of the All India IDBI Officers Association (AIIDBIOA) told IANS.The bank has 1,926 branches and around 17,000 employees, including officers and other staff.

According to Rao, only a small number of employees did not participate in the strike.Wage revision for IDBI Bank staff from November 1, 2012, to October 31, 2017, is due on the lines of similar settlements in all other banks.

“Out of the 1,926 branches, 1,330 were operational during the strike. Banking transactions at those branches were not affected. Cheque clearance was also not affected,” IDBI BankExecutive Director G.A. Tadas told IANS.He said going by the number of branches functioning for two days, the strike was a failure.

However, he was unable to tell the number of transactions carried ou during the strike period compared with normal working days. Tadas said the management was open to negotiations with the unions to settle the wage issue.